Are You Less Connected than a Fifth Grader? Learn Why Ten-Year Olds Are Some of Our Best Users!

I appreciate your emphasis on facilitating the accomplishment of the school’s mission (i.e. teaching/learning) – not on utilizing the new tool.
Parent of CCDS Fifth Grade Student 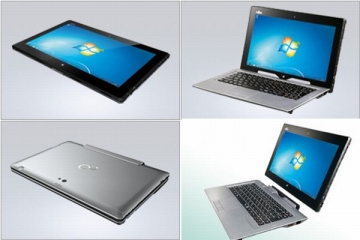 Friday, October 12th, 2012: Cincinnati Country Day is the first institution in the world to roll out a hybrid tablet PC (Fujitsu Q702 as pictured) with Windows 8. Fifth graders get their machines at “Out of the Box Day.”

At Cincinnati Country Day, we are often asked why we put computers in the hands of fifth graders. Having lived this model (1:1 in 5th-12th grade) for over five years as a professional, I’ve seen the reasons up close and personally. Our fifth grade students are some of our best users. They are gentle with their machines (for the most part). When they make mistakes, they are typically “little” mistakes (for the most part). But they always, always surprise us with the great things they do within hours of getting their first computer.

Because our program relies heavily on a strong relationship between parent and child, the fifth grade is an ideal year to distribute tablets. Parents still play a vital, active, direct role in the academic lives of children at this age . . . and kids still listen (for the most part). I am now living this as a parent! My own daughter just got her first tablet, and within a few short hours, she had made her first mistake—e-mailing my entire class a silly note with a drawing she did (in the body of the e-mail) of one of the characters from Miyazaki’s My Neighbor Totoro. Because we have a powerful global address list for our Exchange server, she had the ability to e-mail the whole school, but she lucked out and, instead of e-mailing “Martin, Dr. Gregory K.,” she e-mailed “Martin (G) History,” my ninth grade history class. In her words, “How embarrassing!”  She quickly learned form her mistake and the subsequent conversation we had about e-mail etiquette (e-mailing is forever!). My wife and I also had an extensive conversation (one we’d planned for awhile) with her that night about our family expectations for her use of technology as an academic tool. It was wonderful. These anecdotes capture the essence of why we want the kids to have machines in fifth grade. Yes, they have powerful computers that enhance collaboration, communications, creativity, productivity, and the like. Just as importantly, they learn the role technology plays in our lives in a safe, nurturing environment.

My daughter’s honest mistake is at one end of the spectrum. We never cease to be amazed, however, at the amazing things children do in really positive ways within the first few hours of getting their machines. In her defense, she also created a PowerPoint for science while she waited for me and her brother to finish hockey practice. Pretty amazing! There’s no better way to explain the powers of our program than through the words of some of our constituents. Just after “Out of the Box” day was over, and Rob Baker (Director of Technology) had talked with parents and demonstrated the basics of the machines for an entire afternoon, we received this e-mail from a parent of a fifth grader. It captures perfectly, just why we do what we do. Enjoy!

Thanks and congratulations on a great “out of the box” day!

Having at times in my past been involved in the roll-out of new systems, I appreciate the risk in committing to a rollout at the “Bleeding” edge of technology.  I have some appreciation for the degree of difficulty: hardware: serial # 001; pre-rollout operating system; 1 week to work with #1 – stress test – application compatibility test – discover the quirks - agree on the standard setup – make the image – prep all the other new machines – stage the distribution – plan the intro – and a bunch of other challenges that I can’t even guess at.

From this spectator’s view point, it went really smoothly.  I appreciate your emphasis on facilitating the accomplishment of the school’s mission (i.e. teaching/learning) – not on utilizing the new tool.

Our Fifth-grader can’t keep his hands off HIS tablet!  We had to keep it in the front seat to keep him from opening it up in the car on the way home.  As soon as we got home, he moved my wife’s laptop off of the kitchen computer table and installed his computer and declared it HIS work area.  He plugged it in, opened it and proceeded to start “playing” with it.  We had to threaten dire consequences to get him off of it for dinner.

NOW HERE’S THE IMPORTANT PART:  Over the past month and a half, he has had more than the normal 5th grader anticipation of “out of the box day”.  He has watched with growing frustration as his classmates in math class get and submit their homework in OneNote, while he has had to wait for his teacher to print it off for him hardcopy.  And he couldn’t play the stock market game with the rest of the class because he wasn’t “connected”.  Imagine our surprise when we discovered later this evening that (based on the orientation you gave today – and with no help from us) he had figured out how to open OneNote, get today’s homework assignment out of his email into OneNote, create a new page to do his solution work, and finished his math homework (meanwhile developing a fair amount of proficiency with the stylus).  No pencil and scratch pad!  The only thing he wanted from me was to give him the HEX code to connect to our home network so he could proudly send his homework to his teacher.  (I haven’t let him connect yet, because we haven’t had the discussions that you referenced.)

If our child is any indication, then we think you scored an A++!”

Tablets in the Classroom: Where are the Hybrids?*