Games are Dynamic Textual Representations of the Past

What a historical simulation game does, however, is craft a virtual problem space that represents a real-world one.
Dr. Jeremiah McCall 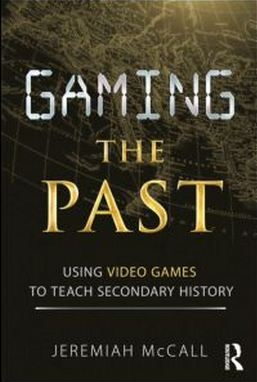 I first met Jeremiah McCall just as I was leaving Cincinnati Country Day at the end of a full day of interviews back in the spring of 2007. I was saying farewell to Kelly Hammond, my predecessor, when he walked toward us, and Kelly felt compelled to introduce him, noting that he was a Ph.D. in Greco-Roman history, a whiz with primary sources, and a gamer. That was almost six years ago. I spoke with Jeremiah for quite some time because I’d had trouble convincing administrators at my old school that there was real value in using games and game design within individual classrooms. I had just had my Honors American Literature students create a Pokemon-like card game as a means of reviewing an entire year’s worth of American literature and culture studies. The kids loved it, and they got a lot out of it. I, however, got into hot water for the exercise. Jeremiah was a sight for sore eyes.

Fast forward three years. McCall became my partner in crime in a co-taught Humanities course for ninth graders. When I was teaching Homer’s Odyssey, he was teaching Greek history. Together we “tore down the walls,” both literally (well, almost) and figuratively. In literal terms, we were lucky enough to teach next to each other in two rooms that could be conjoined by removing a wall. In figurative terms, we were teaching students that there was great bleed-over between and among academic disciplines. While I will focus on Jeremiah’s contributions to the field of games and simulations in education, his reach and influence is both wide and deep.

Last spring, Routledge published Gaming the Past: Using Video Games to Teach Secondary History, McCall’s second book (his first is The Cavalry of the Roman Republic, and he is contracted to write at least two more at last count). Gaming the Past is the culmination of nearly a decade of on-the-ground/in-the-trenches research into, and application of, video games in secondary school classes. The book promotes a pragmatic approach to using games and simulations in history courses. McCall has always been interested in video games, and he knew they could have an enormous influence on students. He also had great respect for scholars and academics such as James Paul Gee and their work, but he knew that if games were to take root in schools, there would need to be a pragmatic framework in place. McCall went to work, and, in his words, “broke eggs.” I cannot possibly encapsulate McCall’s work in detail here, but indulge me as I share a few highlights.

• A Game is Dynamic Text: Historical Simulations are interpretations of the past and need to be treated as such and not as wholly accurate or inaccurate texts. McCall fears that the discipline of history has for too long been defined by “the belief that history is no more than the established record of past events and their causes, fixed by professionals, and received by everyone else. Viewing history this way can only lead students to an unfortunate habit of intellectual passivity” (Gaming 9).

• Play is Not Always the Thing: Games and simulations provide insight into decision-making and systems thinking that occurred in the past and extend into the present. McCall touts the importance of systems thinking as a crucial 21st century skill, one that, like misconceptions about games making education fun, often makes it rigorous and intellectually taxing. In McCall’s classes (and mine!), students are not always eager to play games.

• Question Everything: History games offer an uncommon ability to inspire questioning about the past and allow experimentation with different historical forces. I borrowed one of McCall’s activities one day, and it was magical. I required students, while playing Civilization IV, to craft at least three questions about the game and its representation of the rise of cities. The questions themselves were insightful but gave us a way to explore human experiences at a particular point in history.

• Primary Sources Still Matter: Any serious use of games and sims requires serious use of other forms of historical evidence, especially high quality primary and secondary sources. McCall is probably even more serious about teaching students the craft of analyzing primary sources than he is about using video games.

• Games Create Problem-Spaces: His most recent work is in what he calls the problem-space. Simulation games can compel us with great educational effect to look at the past in terms of problem spaces, which McCall defines as “a more sophisticated articulation of the basic core of game-ness. By most definitions games require players, conflict, and a quantifiable outcome. Players have affordances and constraints embodied in rules. What a historical simulation game does, however, is craft a virtual problem space that represents a real-world one (“Historical Simulations as Problem Spaces: Some Guidelines for Criticism”)

• Be Prepared: McCall’s implementations in the classroom are very organized. He provides detailed written guides for students to follow, rules for taking notes and making observations, and more. He rarely allows his students to “just play.” Gaming is serious business in his classes.

• Gaming Should be Social: Visitors often notice that the most unique feature of one of McCall’s gaming sessions is how social it is. He hasn’t yet read David Brook’s Social Animal, but I can pretty much guarantee that he shares his ideas on the importance of the social features of education. Students often “play” in teams, taking turns managing gameplay, taking notes, and asking and developing poignant questions about the past.

I hope readers have a great sense of the work McCall is doing. He presents at all of our Tablet Conferences, is a heavyweight with the G+L+S group in Wisconsin, has keynoted at academic conferences, is a regular blogger on several history sites, just reviewed major grants for the NEH, and has done significant consulting work in both the public and academic sectors.

The NTA site, you must be thinking by now, is devoted to tablet implementations. I wanted to cover Jeremiah McCall because he is absolutely dedicated to the Tablet PC, a machine with a full physical keyboard (necessary for writing and editing lengthy essays on history and annotating game and sim pages in OneNote), a high-powered processor (capable of running memory hungry PC games and enabling multi-tasking), and an active digitzer (that allows detailed ink strokes that show a student’s understanding of screenshots he uses to assess if students understand a feature of a game). McCall is also a power user of Flash-based games online, all of which present problems for iOS devices. In fact, he often teaches a programming class in Flash, and some of his students have gone on to earn fame on Addictive Games or in multimedia programs in college. He represents the need for schools to think about the devices that allow teachers to use best practices . . . across the board, from one grade to the next, from one classroom to the next. Tablet PCs remove constraints. The technology should not drive the program, the program should be driven by student learning. The technology a school chooses should tap into and inspire great teaching, regardless of what is popular in the consumer marketplace.  When Rob Baker and I consider our environment, we have to think about a pioneering history teacher as much as we have to think about a math teacher who wants to use DyKnow or a student who loves to doodle in ArtRage.