Microsoft Surface Tablet: The Tip of the Iceberg for Education

For Cincinnati Country Day . . . the stylus is perhaps the central component of our world-class deployment. 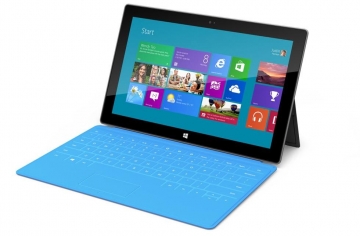 We’re approaching nearly a decade of using convertible Tablets at Country Day school, and there’s little that will sway us to change the hardware we implement. As I have written previously, we’re absolutely committed to a machine that can do it all because as technology leaders we try to, but can’t possibly imagine, all of the great ways technology will be implemented in a PK-12 institution.* We need a flexible business-class machine, one that can endure bumps and bruises but also inspire creative collaboration and artistic adventures. Ten years is a long time to stick with one device (with upgraded models from year to year, of course), and while we just recently switched from Toshiba (who sadly bailed on convertible tablets) to Fujitsu, we’ve been happily swiveling between clamshell and tablet for a long time.

Recent announcements and rumors have pleased us because we’re relieved that manufacturers continue to listen to us and other consumers. I’m hinting, of course, about Microsoft’s announcement earlier this week that they will begin producing their own Tablet PC, the Surface.  Hemingway argued that the beauty of an iceberg is that 90% of it is under water and concealed. I would suggest that the true beauty of a convergence device such as the Surface is, well, below the surface.

Take a quick look at the basic specs for the Windows 8 Pro Version and then read on to see why these matter to us in the world of education:

• Weighs in at 903g or just under two pounds
• Thickness is 13.5mm (just a hair over ½ inch); thin enough to include a USB port
• VaporMag Case and Gorilla Glass Screen Cover
• Intel Core i5 Processor
• 10.6” Clear-Type Display
• 64 and 128gb storage options
• Dual High Performance Antennas
• Kickstand for desktop productivity or content consumption
• 3mm Cover with integrated multi-touch keyboard (PC and keyboard at 17mm)
• Front and Rear Facing Cameras
• HDMI out for projection
• USB and MicroSD ports
• Digital Ink (distance between ink and surface is .7 mm, the closest we’ve ever gotten the tip of a stylus to the surface on which we write) with “Palm Block”
• Two Digitizers, one for ink and one for touch
• Stylus clicks into side of Surface for storage
• Windows 8 OS that enables use of creative and productive enterprise software

When I heard about the Surface, my first question was, “Does it have a stylus?”  My faith was renewed when I learned it did. Readers won’t see or hear much about the stylus in the media because most people simply don’t know the power of the pen. In fact, even in the Microsoft promotional video, the pen is conspicuously absent, and it isn’t revealed until minute 24 of the keynote. For Cincinnati Country Day, however, the stylus is perhaps the central component of our world-class deployment. There is a clear link between the mind, the hand, and arguably one of the most important human technological inventions ever, the pen. Yes, modified agriculture and the wheel were also important, but ask a Shakespearean to point to the most important technological invention in history, and he’ll argue for a device that led to words, words, words.

It’s equally important to us that our students are productive. The keyboard is a productivity tool, one virtualized in the screens of ultra-portables that have recently become popular. Microsoft remains committed to the centrality of productivity to human beings, judging by the fact that the keyboard is part of the offering and by the regular repetition of this mantra throughout the keynote. I obviously haven’t had a chance to play with the Surface, but the fact that the keyboard is integrated is crucial for educators. Yes, it’s only marginally integrated, but the fact that it’s not an accessory says a lot about Microsoft’s commitment to productive people. I got to thinking last night about how important swiveling has been for us over the past decade, and a new modality will likely replace it. Will it be “folding” and “unfolding” now that will enter our jargon at Country Day?

Of course, it would be hard to talk about any device that doesn’t run Windows. I had a neighbor argue with me last week that by not adopting the iPad, I was in the minority. This is incredible to me and highlights just how well Apple has used the media to market their devices. I have nothing against the iPad. My sisters and I bought them as gifts for my parents. They’re wonderful devices, but the best-guess estimates suggest that 85% of today’s machines run Windows. Let me state that again: 85% of today’s computers run Windows. This includes phones and ultra-portables (iOS, Andorid, Linux, etc.). Ballmer cited another figure in his keynote: 375 million PCs will come to market in 2013. We like Windows because it enables lots of different software packages to operate really well for us. Ballmer also noted that “Windows has been the most flexible, general purpose software ever created.”  People tend to ignore this when they make decisions about technology in education.

The iPad, one of my students discovered, could not run Flash, the software we are using tonight and tomorrow to wrap up a 200 page, all-color, PK-12 yearbook. Programs such as DyKnow and OneNote are absolute game changers for us at Country Day, encouraging better teaching and learning. The Surface will run the software we want it to run because Microsoft knows that that 85% is a really big number and that, while it’s fallen from 90%, it’s still the 800 pound gorilla of the technology world. Our machines exist in a crazy robust Windows network that encourages impressive levels of communication and collaboration. This is simply impossible in the cloud or in any other network. Ballmer used the word “ecosystem” to describe the technology world Windows has enabled. I like that.

Finally, the Surface will will allow several ways to connect it to accessories such as mice, printers, projectors, and the like. In addition, a user can add memory via a MicroSD slot. I want to circle back to my original point about flexibility and my inability to imagine how a Middle School French teacher will use technology. The machines we use have to enable as many possible activities as are reasonable. We like USB connections and the ability to plop an SD card into a drive to share files because 50 minutes flies by in a flash, and we can’t be limited by our hardware. Having ports on a device is essential to the functioning of our environment.  I love that Microsoft has made a point of allowing users to link up with Vernier Probes or their home printers . Just as importantly, I need my machine to be able to project so that I (and my students) can share ideas with a group of people.

There’s no specific word yet on price, but at the end of the keynote, Steven Sinofsky stated that the RT version will be priced to compete with similarly equipped ARM tablets and will be available at the Windows 8 release date. The Windows 8 Pro version of the Surface will be available three months later and will have a price competitive with ultra-book class PCs.

I would be remiss if, while celebrating this great news for educators, I did not highlight just how utterly satisfied we are with our Fujitsu T-730s. They have been wonderful for us, top to bottom. Fujitsu has people in their organization dedicated to education, working hard to push convergence technology for teachers and learners. They support what we do at Country Day, and we’ve developed a great relationship with them. I wouldn’t be the least bit surprised if Fujitsu and several other PC manufacturers also roll out devices like the Surface. Their Q550 and the T-730 are clear evidence that they are moving in the right direction. We will obviously make an informed decision about hardware before the 2014 rollout, but we will certainly take lots of factors into account.

In the midst of his portion of the keynote, Steve Ballmer stated, “People want to be able to do all of that (flexible, mobile computing) without compromising the productivity that PCs are uniquely known for.” I couldn’t agree with him more. At Cincinnati Country Day, we hate compromise. The Surface looks to be the next great wave in hardware that will continue to allow us to do great things with technology at the nation’s oldest 1:1 school.

*Students in grades 5-12 are 1:1, but we have several Tablet carts available for Lower School uses, and each and every classroom up through fourth grade has two dedicated tablets that can be used when appropriate.