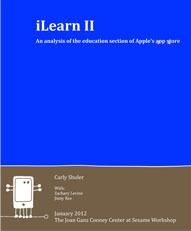 
We have included a link to the report below which has some useful information and lots of pretty charts. Let us know what you think.

View the ilearn2 report
Posted in: Tablet News and Trends