Who is Paying for iPads in the Classroom?

Grants, Bonds, and Discressionary Funds are just a few of the techniques to help schools afford iPads.

“Through grants, the district has been able to provide about 6000 iPads which are used by about 20,000 students,”
Franklin Shuftan, a spokesman for Chicago public schools. 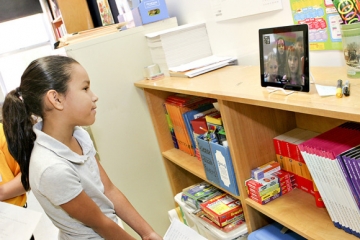 Macworld has an intersting article showing how schools are paying for iPads through grants, bonds, giving up textbooks and discressionary funds. Some schools have purchased more iPads by getting last years iPad 2 model at a discount. Check out the snapshot below then visit the article here.

Chicago, IL:
“Through grants, the district has been able to provide about 6000 iPads which are used by about 20,000 students,” says Franklin Shuftan, a spokesman for Chicago public schools. “We estimate that through the use of discretionary funds, individual schools have on their own purchased another approximately 14,000 iPads which are used by approximately 30,000 students.”

San Diego, CA:
The city’s voters had approved a $2 billion bond issue in 2008—$500 million of which was designated for a five-year “digital transformation program” designed to update the district’s curriculum.

Barona, California
The Barona Band of Mission Indians, long a source of grant funding to such schools, says it paid to distribute 115 iPads to 16 schools in the state this year—up from 38 iPads in six schools a year ago.

McAllen, TX:
the school district has already distributed 6500 iPads, out of a planned 25,000-unit distribution. The district freed up money by scrapping its previous plans to put three desktop computers in every classroom.

Burlington High School, MA
Paid for 1200 iPads by getting rid of textbooks